For this project file example, we use an invented watershed data set. The topography of the watershed is shown in the Figure 15 with a 50 m resolution GSSHA grid overlay:

This watershed has a mask map which is appears as (with contrived coordinates):

In addition, the watershed digital elevation model from which the Figure 15 was derived (using WMS) appears as:

The mask and elevation maps were saved in files name “mask.map” and “elev.map”, respectively. Notice that the outlet of the catchment is in row 6 and column 10 of the DEM. This is the lowest point on the perimeter of the watershed. Also notice that the headers for the two maps are identical, and that the grids are square, and 50 m in size.

The following represents the simplest possible project file to run GSSHA. This project file will run GSSHA with a spatially uniform Manning roughness coefficient equal to 0.036 and with spatially uniform rainfall at a rate of 80.0 mm/h for a duration of 2 h (120 min). The simulation will run for 2000 min. The outlet hydrograph will be output every 30 minutes. Notice that lines that begin with the pound sign are comments, which are allowed in the project file.

Without the comments, the project file is more readable:

This project file is saved under the name “simple.prj”. GSSHA is run by typing the command “GSSHA simple.prj”. For this example, the following outflow hydrograph is the result: 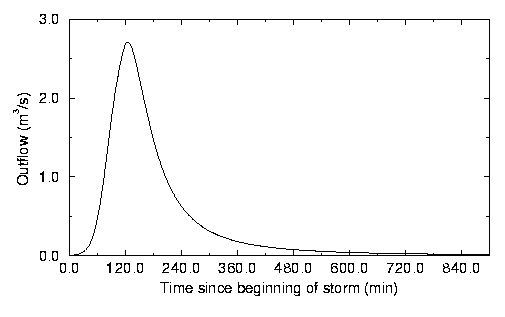