The quality of the DEM plays a major role in the success of distributed hydrologic simulations. Unfortunately, DEMs almost always contain errors. Large flat areas in the DEM may be the result of the limited vertical resolution of elevation data. Routing over such flat areas can create problems for the numerical techniques used in GSSHA. Artificial pits in the DEM may be artifacts of the interpolation scheme used to rasterize digitized contours, or may be the result of coarse resolution in areas of concave topography. As a rule of thumb, the user must cross check the DEM with topographic maps of the area. Interpolating elevations from the DEM at one resolution to a grid with cells of coarser resolution induces additional error.

The first option to discover errors in the elevation grid is to turn on the Digital Dams display option in the WMS Display Options dialog under the 2D Grid tab. The cells whose elevations are lower than its four neighbors are marked. Toggling the cell display option from smooth to blocked helps to visualize the problem cells as well. 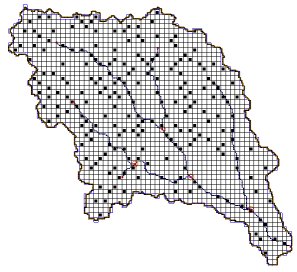 Figure 3. The digital dams are displayed as dots in the affected cells.

One way to discover potential errors in the grid elevations is to run GSSHA with a relatively short time-step, uniform rainfall, and simulating just the overland flow. Infiltration, channel routing and all other model options are turned off. If the simulation terminates normally, overland depth maps can be examined to determine where water accumulates on the overland flow plane and whether the topographic map of the area justifies such accumulation. Alternatively, if the model crashes at a certain location (whose address is printed on the screen as well as at the bottom of discharge file) the user must double-check the grid elevations for problems. This process is described in detail in the next chapter. Some manual editing of the grid elevations is almost always necessary to impose actual drainage trends and correct obvious errors in the elevations. Manual editing is done in WMS by selecting individual grid cells and manually typing in a new elevation in the edit window.

WMS has three automated grid smoothing capabilities. These are the Smooth Grid (TOPAZ), Tweak Digital Dams, and Clean Dams options found in the GSSHA menu in the 2D Grid module. The Smooth Grid (Topaz) option runs the TOPAZ program which, as part of developing cell to cell flow patterns, produces a smoother grid that fills topographic depressions. There are two drawbacks to this method. The first drawback is that all depressions are filled, without regard to actual topography. The second drawback is that TOPAZ searches for flow patterns by looking at the lowest of the eight cells around the center cell which can produce diagonal flow patterns. GSSHA, on the other hand, only looks at the four cells adjacent to the center cell and not the diagonal cells. Thus TOPAZ can find diagonal flow patterns which GSSHA cannot and instead a digital dam is produced. TOPAZ is not the cure-all to digital dam woes. One benefit (or drawback) of TOPAZ is that it will fill depressions larger than one grid cell.

The Clean Dams options has been developed specifically to address the digital dam problem for GSSHA. The Clean Dams option runs the program cleandam to find and fix the digital dams in the elevation grid. The cleandam program will first run the Tweak Digital Dams algorithm repeatedly until the number of digital dams stops decreasing. Next cleandam begins a series of random searches over patches of grid cells. The random searches begin at the digital dam and stop when a border of the patch or a cell lower then the beginning cell has been found. The patch size begins with a radius of 8 and increases until it reaches 256. As the patch size increases, the number of searches increase exponentially and thus searches on the 256 radius patch can take a while. Once a lower cell than the digital dam has been found for a patch the search stops after finishing the set of random searches for that patch. Once the set of random searches that end in lower cell elevations has been found, they are evaluated according to a cost function. A linear interpolation from the beginning cell to the ending cell is done, and the path with the least cutting required is the chosen path. The cells are then adjusted along the path to match the linear interpolation.

A significant advantage to the cleandams program is that it can accept a mask that indicates where natural depressions exist. Cleandam will simply ignore the digital dams in the areas indicated by the mask and will even route digital dams neighboring the depressions to the depressions if that is the best option. Cleandam also works on the four-point pour method, just as GSSHA does. While the random search nature of cleandam does not guarantee the best path will be found, cleandam overall does an excellent job of fixing the digital dams. Care does need to be taken in accepting the results of cleandam. The resulting elevation file should be checked against topographic maps. Experience with cleandam has shown that in areas of very low relief cleandam will occasionally cut across areas that should not be cut across. If there is a particular digital dam that gives cleandam a problem it is often easiest to fix the digital dam manually in the original elevation grid and re-run cleandam.

Non-smoothed grid elevations result in the need for short computational time-steps and can lead to numerical instability problems when running GSSHA. Properly smoothed grid elevations, particularly those with coarser grid space resolution, allow use of longer time-steps while maintaining the stability of the model. Once overland flow is working satisfactorily, other processes such as infiltration and channel routing can be incrementally added to the simulation.