Infiltration:Green and Ampt with Redistribution (GAR)

The GAR method expands the capability of the GA method by redistributing soil moisture during periods of no- or low- intensity rainfall. This allows infiltration capacity to recover for the next burst of storm intensity, and makes the GAR method suitable for simulating multiple rainfall events in series. When using the GAR method, multiple wetting fronts occur as burst of rainfall occur. During rainfall haitus these fronts are redistributed to produce a new value of initial moisture for calculations during the next burst of rainfall, Fig 12.

This method is selected with the INF_REDIST card in the project file. The technique for hiatus and post-hiatus infiltration was developed by Ogden and Saghafian (1997), and is similar to the method developed by Smith et al. (1993).

The GAR technique requires three additional inputs to the four required for the GA method, residual saturation and pore-size distribution index (Brooks & Corey, 1964), and field capacity. These must be input with in the Mapping Table. Assignment of parameters is discussed in Section 7.5.

Ogden and Saghafian (1997) performed a comparison of the GAR approach against a numerical solution of RE on each of the 11 USDA soil textural classifications for two pulses of rainfall separated by a period of no rainfall. It is important to note that the traditional GA is invalid for this case, unless the period of no rainfall is long enough in duration for the soil moisture profile to equilibrate. These results and other analysis presented by Ogden and Saghafian (1997) indicate that the GAR approach is a reasonably good approximation to the numerical solution of RE for well-drained soils, subjected to multiple pulses of rainfall. The agreement between the two approaches is better for finer textured soils. Coarse textured soils dry faster at the surface because of moisture profile “bulging”. The GAR approach cannot predict this phenomena, and therefore, overpredicts near soil-surface water contents after rainfall. 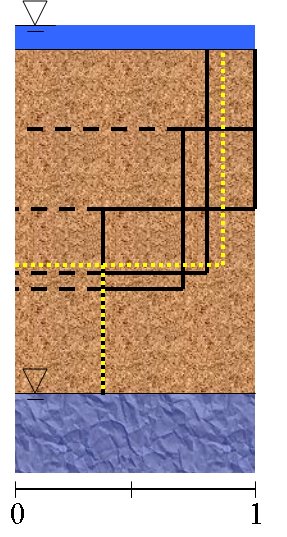